Discover how one of our clients, New Life Vitamins, established their Amazon business and the results they have experienced with Feedvisor. By Catie Grasso January 4, 2019 Michael Zaccardo is a true entrepreneur. The savvy ex-IBM businessman founded his multimillion-dollar company, New Life Vitamins, while on the search for a new path, volunteering in a monastery as a gardener, cook, and all-around contributor. Catering for monks with specific dietary and immune system requirements prompted Michael to supply them with special dietary and health supplements to improve their overall well-being.

Word spread fast about the positive effects of the supplements, and the orders started pouring in from visitors to the monastery and beyond. From there, things took off and New Life Vitamins launched its website in 1998. Soon after, Amazon reached out to New Life Vitamins to buy its products. By 2003, New Life Vitamins had opened its first Amazon storefront.

How Did You Start Selling on Amazon?

We started selling to Amazon via Vendor Central before we were selling on Amazon ourselves. At the time, it worked out well because we only had our own website and used pay-per-click advertising to market our products online, and were doing our own fulfillment. However, as Amazon became a stronger and stronger player, I realized the potential of receiving additional orders.

In 2003, we made the move to sell on Amazon’s third-party marketplace. We realized that to qualify as a powerful Amazon player, we needed to become FBA. Utilizing Fulfillment by Amazon shows customers that we are credible and utilizing Amazon’s fulfillment centers and logistics.

How Did Feedvisor Come Into the Picture?

I had known about Feedvisor for a while, but at the time, there was not a lot of competition out there, so we figured a more rudimentary repricer could do the job for a while. We got by using Amazon’s repricing system, followed by RepricerExpress and another repricer, but we simply were not receiving the in-depth business insights that we needed.

These repricers were not staying on it — they were trying to figure out the competition as much as we anticipated because they simply were not sophisticated. In the fall of 2016, we understood that cutting-edge, algorithmic repricing could offer a better alternative, and that is when we started using Feedvisor.

What Makes Feedvisor’s Optimization and Intelligence Platform Stand Out?

The inventory control, the powerful pricing decisions, the detailed performance reports, and the non-competitive reports are immensely beneficial — we look at them on a daily or weekly basis. These are all things we did not have in place before and now add tremendous value to our business.

How Has Your Experience Been With Feedvisor Overall?

After five strong months of the software running the way we want it to, we were able to identify non-competitive items and stale inventory, which helped us make significantly better business decisions. Our ordering process is a lot smoother with the algorithmic pricing in place. To top it off, our ability to go into the dashboard by ourselves and adjust a SKU for liquidation, Buy Box share, sell out date, or special pricing makes us ask ourselves, “How did we live without it?”

Did You See Significant Improvements in Sales and Overall Performance?

Our sales numbers increased by 23% within five months of using Feedvisor. The great majority of our top 20% of SKUs have gone up anywhere from five to 20 points in terms of Buy Box share.

What Advice Do You Have for Other Retailers Using a Repricer?

Get to know and understand the entire capability of Feedvisor’s platform. There are some extremely helpful reports that we utilize that we wouldn’t get with another solution. If someone is using a repricer, they have to understand how it aids them in making decisions that will ultimately serve to increase their overall sales and profitability. Feedvisor has given us the confidence to go head-to-head versus strong competitors that we have identified, even Amazon. If you are competing against Amazon, this is one of the most effective tools out there. How to Strategically Leverage Drop Shipping for Your Amazon Business 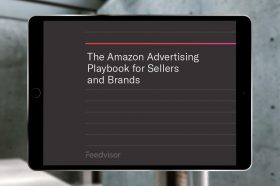 Your product images on Amazon play larger role in conversion than you think. Follow this optimization checklist to make sure your images are up to par.

Discover How Feedvisor’s “AI-First” Platform Can Grow Your Business