What Advertisers Need to Know About Walmart Connect

Walmart has renamed its advertising business and is expanding its services. Learn everything you need to know about Walmart Connect. By Catherine Ibarra February 11, 2021 Walmart has recently announced it is building out its advertising business and renamed it Walmart Connect (formerly known as Walmart Media Group). Walmart Connect is offering advertisers the ability to reach consumers in Walmart brick-and-mortar stores, on its digital platforms, and across the web.

The retailer is enhancing its offerings and leveraging its broad omnichannel capabilities, closed-loop system, and customer data on additional channels to link brands with more of their customers. The move is intended to help Walmart diversify its revenue streams and become one of the top 10 U.S. advertising platforms within a five-year time frame

Walmart’s chief customer officer, Janey Whiteside, stated “Walmart has always connected customers and the great brands they love, and now we have the ability to offer an easy-to-use platform to enhance those connections at scale… By expanding our offerings, we’re creating measurable value for our partners and customers alike in our ecosystem and beyond.”

Amazon will likely continue to dominate the advertising category due to its large suite of advertising solutions and over 2 million active sellers. However, Walmart Connect can still capture a larger slice of businesses ad spend.

Walmart is offering more advertising features, including its own DSP that will rival the Amazon DSP. It is a valuable growth opportunity for Walmart, as it has also seen a rise in sellers as a result of its spike in e-commerce sales, and subsequently increased the demand for better ad tools.

Amazon currently makes up 75.7% of U.S. e-commerce channel ad spending. Emarketer predicts Amazon will represent 77% of the market within the next year. Walmart ranks as the runner up by accounting for 4.9% of the channel’s ad spending. While Walmart generates significantly less ad spending than Amazon, the retailer’s decision to expand its advertising services can help it surpass Emarketer’s growth forecast (approximately 7% by 2022) and become more prominent in the space.

In Walmart’s 2020 annual report, the retailer disclosed that its Walmart Media Group, as well as its financial services, fuel, and related products, produced less than 1% of its annual net sales, amounting to $524 billion. In contrast, Amazon’s “Other” category, primarily made up of its advertising services, generated nearly 6% of the retailer’s third quarter sales, which came out to $5.4 billion. Although it is not an exact side-by-side comparison, Walmart’s substantial revenue for the segment that includes advertising reveals its potential in generating significant profit for the company once its ad services are developed.

Should Sellers Invest in Walmart Connect?

Brands and sellers who operate on Walmart will benefit from investing in Walmart Connect, especially if their products are available in-stores as well. Walmart is superior to Amazon in its physical store presence and sellers will be able to display their ads inside stores, visible to millions of shoppers walking by (as noted in key updates). Walmart’s omnichannel capabilities can begin nurturing the consumer online and display the same brand’s ads in-stores to drive them down the funnel and encourage conversion.

Businesses who exclusively sell their products on Walmart.com may also find the retailer’s advertising service worthwhile. The DSP Walmart is creating with The Trade Desk is currently its biggest offering to sellers, as it enables them to reach consumers at scale. Brands’ ads will be distributed across the web, driving brand and product discoverability. The DSP will harness The Trade Desk’s technology and use Walmart’s shopper data to help brands and sellers create more effective ad campaigns. Walmart sellers will have reach and targeting features that are similar to Amazon DSP.

E-commerce advertising channels are on the rise as the demand for ad solutions grew due to consumers’ new shopping habits. Walmart’s decision to expand its advertising service will help it better compete with Amazon. Walmart Connect is projected to become one of the top 10 U.S. advertising platforms in five years. Walmart sellers should take advantage of the retailer’s enhanced advertising capabilities once they are available to drive greater awareness in-stores and online. The Pros and Cons of Selling on Walmart Marketplace

Are you thinking of diversifying to Walmart’s e-marketplace? Learn about the pros and cons of selling on the platform to inform your decision. How to Boost the Ranking of Your Walmart Product Listing

In this LinkDoctor guest post, discover how to optimize your Walmart product listings to improve organic search rankings and increase your sales. 4 Tips to Improve Your Seller Performance on Walmart Marketplace

Learn how you can enhance your seller performance to become a top seller on Walmart’s marketplace. 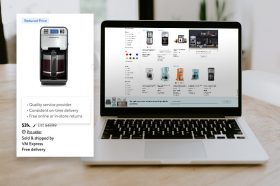 The new pilot program will help sellers build credibility and consumer trust on Walmart’s marketplace. Discover the eligibility requirements and benefits for your business.