Amazon recently announced that it is offering Twitch inventory through Amazon Advertising. Advertisers are now able to purchase video and display ads on the popular livestreaming platform from the ad service they are already utilizing.

Since ads on Twitch are available for purchase through Amazon Advertising, advertisers have the added benefit of Amazon’s audience insights and metrics to make better informed decisions for their campaigns. The new advertising capabilities present a huge growth opportunity for brands by targeting Twitch’s large and highly engaged audience.

Advertisers were previously able to purchase ads on Twitch, but the process was extensive as the transaction was manual and required multiple steps. Now with Amazon Advertising, purchasing ads on Twitch has become much simpler for users since the retailer integrated the functionality on its advertising platform.

Brands will greatly benefit from not only the ability to programmatically buy ads on Twitch through Amazon Advertising but also the valuable insights offered that can help optimize ad performance. The streamlined process enables advertisers to save time, purchase ads on Twitch effortlessly through Amazon’s advertising platform, and view in-depth ad data within a single program.

Twitch, the livestreaming platform, has a huge audience of viewers, over 17 million daily, on average. Furthermore, Twitch viewership is projected to increase by 14% this year and reach 16% of the U.S. audience for digital video, according to eMarketer. The consistent increase in Twitch viewership can be attributed to the company expanding its services from livestreaming for gamers to live sports and music after it was acquired by Amazon in 2014.

The Twitch community is not only sought after by advertisers due to its huge audience but also because of its demographic and engagement level. The Twitch audience tends to be younger — more than half are between the ages of 18 to 32 — and highly active on the platform.

Advertisers are able to reach the Twitch community through ads on the livestreaming platform since the audience may not be accessed through other traditional channels, such as linear TV. Brands can appeal to the diverse interests of the Twitch audience, gain a brand new customer base, and grow their business.

Amazon is currently the largest advertiser in the United States. The addition of Twitch to Amazon Advertising comes after the retailer saw a significant spike in ad sales. Amazon’s “other” category, which is primarily its advertising business, grew by 41% in Q2 compared to last year, reaching $4.22 billion in revenue. Considering that Amazon’s advertising business has significantly grown, like the viewership on Twitch, it is not surprising that the retailer recognized the value in integrating Twitch capabilities to its ad service.

Amazon’s Twitch capabilities are highly beneficial to advertisers. Amazon Advertising users will have the ability to purchase ads on Twitch and have access to the retailer’s audience insights and metrics to make better informed decisions for their campaigns.

Advertisers are able to reach the Twitch community effortlessly through Amazon’s advertising platform. Brands can gain a new customer base by appealing to Twitch’s large and highly active audience. Amazon integrating Twitch to its ad service can significantly increase brands’ customer reach and further grow its advertising business. Uncover everything you need to know about Amazon’s advertising portfolio, from traditional Sponsored ads to newer beta options such as video in search ads. Q4 Amazon Advertising: How to Enhance Your Brand Experience and Capture Demand

Discover tactics to optimize your Sponsored ads and content strategy to drive discoverability and engagement during the critical Q4 season. 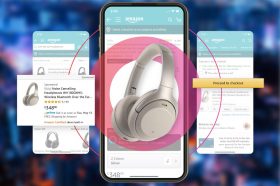 Learn the new features and benefits of Feedvisor’s AI-driven platform for brands and retailers to drive discoverability, conversions, and increased market share on Amazon. Technology Series: The Challenges and Opportunities With Advertising on Amazon

Feedvisor’s CTO and co-founder Eyal Lanxner provides insight into the critical role data plays — and the complexities involved — in finding the optimal combination of ad campaign structure and performance.