In our latest webinar, guest presenter Brian Liebman from Amify explains how to remain nimble on Amazon during the high-volume Q4 season. By Catie Grasso October 25, 2018 In our latest Amazon experts webinar, Feedvisor was joined by co-presenter Brian Liebman from Amify to detail specific, tangible ways that sellers and brands can remain nimble and proactive during the Q4 period of high sales velocity. Given Amazon’s massive reach and exposure — the platform represents nearly 50% of the U.S. e-commerce market — you should have a detailed fourth quarter plan in order to effectively capitalize on the increase in search volume, traffic, and conversions that the holiday season offers.

One of Brian’s key strategies for conquering the fourth quarter and remaining agile when challenges arise is to plan for contingencies. Due to the fact that selling on Amazon involves many stakeholders and third-party relationships such as with manufacturers and suppliers, shipping companies if you are running a merchant-fulfilled operation, and Amazon staff that run FBA warehouse operations and customer service, there is always the chance that something does not happen according to your Q4 plan. Whether there was a hiccup in the supply chain, a shipment delivery issue, or an unexpected spike in demand that caused an inventory stockout, you can not predict marketplace challenges at any time of year, let alone during the heightened sales period from October through December.

In the early portion of Q4, it is probably fair to say that you have been working on your Q4 plan for several months and are in the final phases of the execution. Brian recommended having a morning huddle with your team to discuss things that are happening according to your plan and allow you to call the backup plans into place if necessary. The time leading up to the holidays is full of opportunity for you to glean best practices so that your plan is as sturdy as possible prior to the key moments in time — Black Friday, Cyber week, December 8-17 which are strong Amazon sales days leading up to Christmas, and peak mobile shopping days for the last minute shoppers, which will are typically December 18-22.

Managing Q4 With the Right Technology

Effective inventory management is arguably the most essential aspect to selling on Amazon during the fourth quarter. If you stock out of a core SKU, you run the risk of compromising your profit margins and losing out on conversions. If you are an FBA seller, being aware of your Inventory Performance Index, stocking limitations, and long-term storage fees will help you have a more detailed, 360-degree view of your performance. Given that the time period immediately following the holidays is known for rampant returns, identifying a returns management strategy in advance will help you efficiently deal with the probable influx of returns in the new year.

Additionally, implementing an AI-driven pricing optimization solution and having a SKU-specific pricing strategy is business-critical. If you are underinvesting in pricing optimization today by not having a solution in place at all, you have one and are not leveraging it to your advantage during the peak sales season, or you are utilizing a rule-based one that can have a negative impact on your profit, you are running the risk of not being as profitable as possible on every sale. Particularly during the holiday season, it is imperative to have a pricing solution that strives to predict how the hyper-competitive marketplace arena will evolve, help you make more informed decisions based on these predictions, and understand any sales trends and patterns that you should be aware of going into year end.

In order to get your products in front of new and returning customers during the holidays, you need to make sure that your storefront and specific ASINs are visible. To increase exposure, you should enhance your marketing efforts to boost profits and optimize your return on ad spend. The ad type that you run, such as Sponsored Products or Sponsored Brands, will be determined by your seller makeup — whether you are operating as a 1P, 3P, or hybrid seller on Amazon. If you are a competitive seller, you should actively work to maintain control of your Buy Box share, as the majority of Amazon’s sales take place through the Buy Box.

You should also establish a cadence of incremental promotions throughout the fourth quarter to ensure that you are capitalizing on any deficiencies that the competition is facing and increasing your product discoverability and reach. For marketing promotions to prove successful, you need to make sure that your product detail pages are set up and enhanced properly. Be sure to manage and monitor your keywords on an ongoing basis, A/B test them to improve your product page conversion rate, and make sure that your images, video sets, and product descriptions are all clear, accurate, and compelling. Given that the days just before Christmas are peak mobile shopping days, ensure that your listings are mobile optimized and that you don’t have any negative reviews that will drive a customer away from a listing or cause them to abandon their shopping cart.

Most notably, Brian closed with a few intangible recommendations for sellers and brands to keep in mind this holiday season. To begin, you should trust your strategy. You have crafted a comprehensive plan to tackle Q4 with confidence, trust that it is going to be executed seamlessly. Next, know the retail math involved with operating on Amazon during Q4 — participating in Lightning Deals, expediting your shipping into Amazon fulfillment centers, dealing with returns, and so on.

Anticipate the competition and establish yourself as a leader in the space, whether it is within a specific product category or overall on Amazon. Think big and work hard to carry your momentum into January to start the new year off on the right foot. Lastly, don’t rely on hacks. As high-volume sellers and brands on Amazon, you should invest in the systems, processes, and tools that will drive your business forward at scale and help make your Q4 season the most productive and profitable it can be. 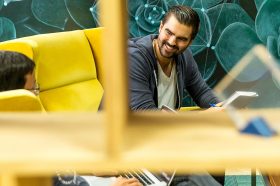 How to Remain Agile on Amazon During the Holiday Season [Guide]

In this guide, discover how to effectively act on your holiday plan to drive discoverability and organic traffic to your listings. Preparing for Q4: Why Reputation Matters

In the latest webinar from Feedvisor's "Ask the Amazon Experts" series, we teamed up with Colleen Quattlebaum and Liz Fickenscher from eComEngine to take an in-depth look at how reputation can greatly impact the high-volume holiday season that comes in Q4. The Online Retailer’s How-To Guide for a Successful Q4