What Is Fueling the Growth of Chinese Sellers on Amazon?

Uncover the key indicators that the surge of Chinese sellers across Amazon’s U.S. and European marketplaces is here to stay. By Catie Grasso October 29, 2019 While 47% of the top Amazon.com sellers are based in the U.S., an increasing number — 38% in 2019, up from 24% in 2016 — are based in China, according to new research from Marketplace Pulse. Chinese brands, retailers, and manufacturers have been galvanized to sell on Amazon, particularly the company’s U.S. and European marketplaces, for the following reasons:

The Guangdong province in southeast China is estimated to be home to 40% of Chinese sellers, with the major city of Shenzhen at the forefront of manufacturing and industrial production. In December 2018, Amazon hosted the Amazon Global Store Seller Summit in the Zhejiang province in eastern China to equip Chinese brands, retailers, and third-party sellers alike with the tools and expertise to effectively build a cross-border business, launch new products, build a brand and cohesive reputation, and so on.

Despite the seemingly unending trade war between the U.S. and China, it is clear that consumer demand for Chinese-made goods is not going away, so brands and retailers need to decide whether they are going to pass on the increase to shoppers or absorb the cost of the tariffs themselves. Given this steady demand, it makes sense that Chinese manufacturers are continuing to innovate — 60% of Chinese sellers’ sales are generated from new products created in the past 12 months.

This year, eMarketer estimates that nearly one-quarter of digital buyers in China are expected to buy on cross-border sites. This information, combined with the low cost of manufacturing for Chinese sellers, only reinforces the notion that these stakeholders are going to continue fortifying businesses both in their native country and beyond. Discover ways to generate more liquidity and how increased cash flow can improve your Amazon sales rank and increase your profits. 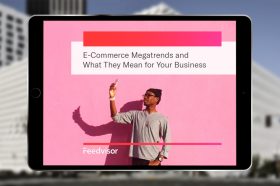 E-Commerce Megatrends and What They Mean for Your Business

Understanding these key megatrends will enable you to optimize all facets of the consumer experience, both online and offline. How to Use Social Media to Drive Business Growth

Discover how to master social media marketing and utilize it as an integral aspect of your comprehensive Amazon strategy. Amazon’s latest addition to its advertising options fills a highly anticipated gap in its selection — remarketing. Discover how Sponsored Display works and terms of eligibility.