How to determine how many keywords to use per ad group on Amazon? Which keywords match types should you use? Get Amazon Ad keyword advice. By Catie Grasso November 3, 2022

This blog was originally published in 2019 and has been revised to include new and updated information.

Keywords are a part of both your organic and paid strategy on Amazon. First instincts may tell you to use as many keywords in your product listings or your advertising campaigns to reach the widest audiences, but not limiting your keywords will cause more harm than good.

Keyword match types allow you to fine-tune which customer search queries your ads are eligible to show against.

When to Use Broad, Phrase, or Exact Keyword Match Types for Amazon Ads

When it comes to Amazon Advertising, keyword match types allow you to fine-tune which customer search queries your ads are eligible to show against. Manual targeting for Sponsored Products and Sponsored Brands offers broad, phrase, and exact match types — each of which has its own use cases. These PPC ad types can have a variety of keywords on all three match types, with bids based on the anticipated impact.

Sponsored Products also offer negative phrases and negative exact match types, which prevent ads from being triggered by a certain search term (word or phrase). When a keyword is selected as negative, the ad will not be shown to consumers searching for that phrase.

Broad match keywords should be used to expand your keyword coverage and increase the reach and exposure of your campaigns.

With broad match keywords, your ad may appear when a customer’s search term contains all of the keyword terms or their close variants, such as plural forms, acronyms, stemming, abbreviations, and accents. The customer search term can contain keywords or synonyms in any order. Broad match keywords should be used to expand your keyword coverage and increase the reach and exposure of your campaigns. 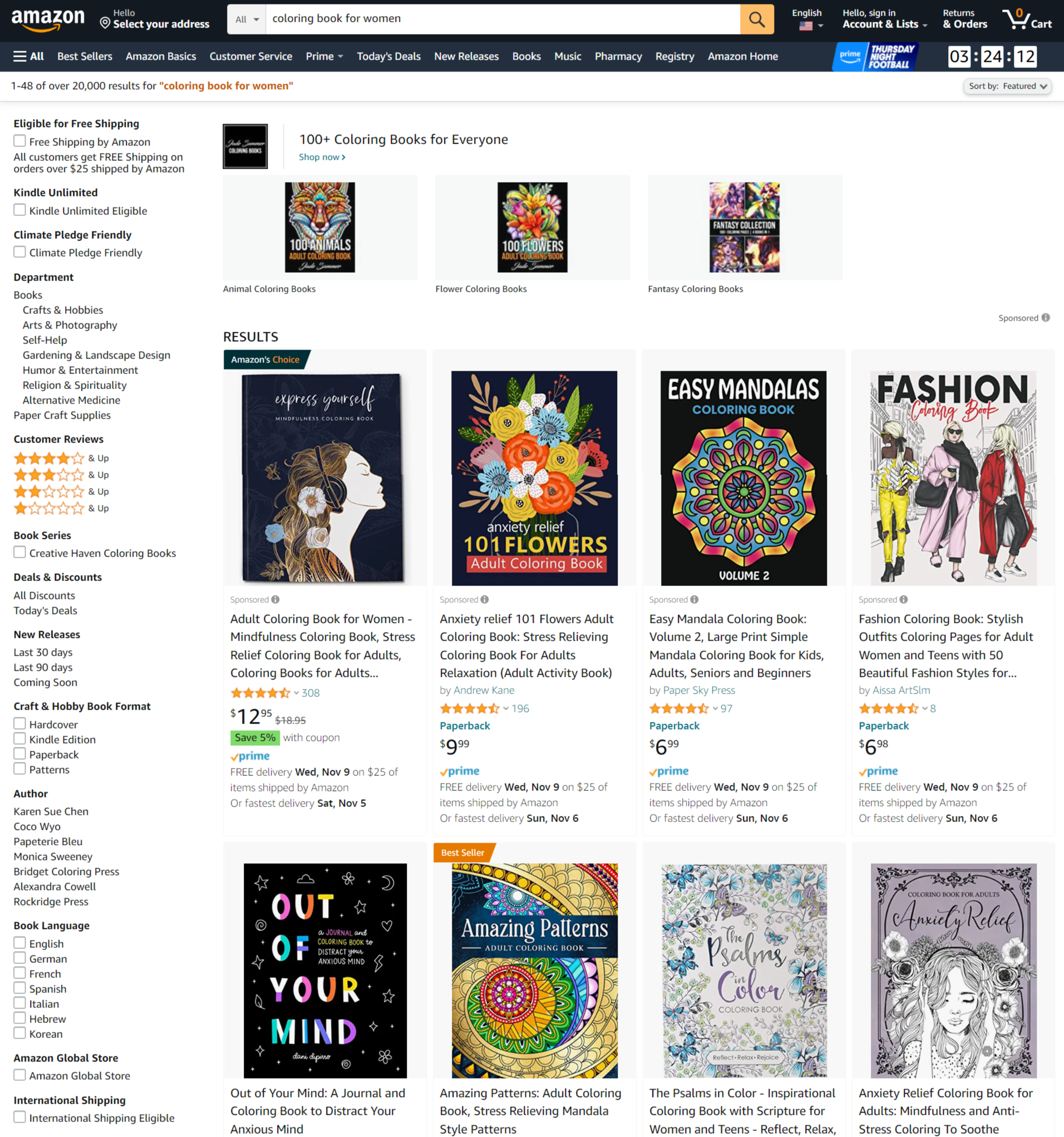 With an exact match for Amazon Advertising, the customer’s search term needs to exactly match the keyword for your ad to appear. Unlike broad or phrase matches, if a shopper searches for other words before or after your exact keyword, the ad will not show. Although it is the most restrictive match type, it is usually more relevant to the buyer’s search and is intended to deliver ads to an extremely targeted set of shoppers.

Exact match type should be used for keywords that are most relevant to your product, therefore indicating that you should bid higher for these keywords.

When adding keywords manually, you can choose the keyword match types in the match type drop-down. As mentioned earlier, if you are creating a Sponsored Product Ad campaign, you can also make your keyword a negative match type.

Once a campaign has been made, you cannot modify the match types. However, you can add incremental keywords with different match types while a campaign is active.

Amazon has a limit of 1,000 keywords for every ad campaign. We recommend sticking between 35-60 keywords.

How Many Keywords Per Ad Group (Amazon PPC) Guidelines?

One question we often hear is, how many keywords per ad group (Amazon PPC)? Unfortunately, like many aspects of Amazon, it depends. Although Amazon does have a limit of 1,000 keywords for every ad campaign, we don’t recommend using more than 35-60 keywords, depending on your match type.

Is It Bad to Have the Same Keyword in Different Amazon Ad Groups?

There is no “one-size-fits-all” solution for structuring your campaigns and ad groups. But you can organize and manage your Sponsored Products within a campaign — they can be used to group your ads together by brand, product, category, price range, or other unique classifications like theme or targeting strategy.

Every Amazon Sponsored Products campaign includes one or more ad groups. The first one is automatically created when you make the campaign; from there, you can add additional ad groups to the campaign once it has been saved. Amazon recommends creating ad groups with products that fall in the same category, whether you are using automatic or manual targeting or a combination of both strategies. Doing so will allow you to improve your bidding strategy, relevancy, and overall targeting capabilities.

Your ad is served to consumers when the bid you set is triggered by an ad group’s keyword or product-targeting qualifications. In automatic campaigns, you can apply one bid to the entire ad group or leverage one of the four auto-targeting options for product attribute targeting (PAT). With manual campaigns, you can select a group of keyword or product targets to apply to all of the products in the ad group.

With ad groups, you should focus not on the keywords but rather on only the products associated with the ad group.

Bidding on the Same Keyword in Different Campaigns

There is one common question many sellers ask themselves: Is it risky to have the same keyword in multiple Amazon ad groups?

While it is a very common question and should be addressed, there is no direct, clearly defined answer. Although it should be fine to have overlapping keywords in various Amazon ad groups, as long as the keywords are relevant to the products in the ad group, you would need to experiment on your own and track relevant analytics to truly know.

It is critical to note, though, that in a manual campaign, once an ad group becomes a keyword-targeted ad group, you cannot add product targets for PAT. Likewise, once an ad group utilizes PAT, it is like that permanently and cannot incorporate keyword targets.

With ad groups, you should focus not on the keywords but rather on only the products associated with the ad group. For example, if you are an apparel company selling shirts, one ad group could include all of your red shirts, and the keywords should be relevant to each product included. You can also break it out even further, creating ad groups for your short-sleeve red shirts, long-sleeve red shirts, long-sleeve black shirts, short-sleeve black shirts, and so on.

You can get even more granular based on product characteristics. For example, an ad group could be collared, short-sleeve red shirts. The ad group pertains to a grouping of similar, closely related products, preferably under one parent ASIN.

Amazon recommends adding as many similar products to the ad group as possible with manual campaigns because you are more likely to receive ad impressions when the products share the exact keywords.

Your success, though, will ultimately come down to how you bid on each particular keyword. This process will vary based on the campaign strategy and pricing of the group of products, among other variables. Your performance will be determined by how much or how little you bid on the keyword once it is in the ad group. For example, you may sell a luxury shirt that you are willing to bid higher on, given that a single sale will drive revenue and an optimal ACoS, while bidding on a generic, lower-priced shirt may yield an ACoS that is not profitable.

Although the broad, phrase and exact match keyword types are only available for manual campaigns. All Sponsored Products campaigns using automatic targeting now have enhanced keyword targeting options. They are as follows:

The Most Powerful, AI-Driven Amazon Advertising Optimization and Intelligence Platform

When naming the ad group, use a name that is descriptive and will resonate with you. Each campaign’s ad group name must be unique, but you can use the same ad group name in different campaigns. Regarding the keywords themselves, you can use Amazon’s suggestions, your own keywords, negative keywords, or keywords relevant for product attribute targeting.

Amazon Advertising match type is a key consideration when creating your initial keyword list and will help you guarantee that you are not leaving out any potential strong performers. By limiting your keyword set from the start, you will have fewer insights to learn from, and experimentation is critical when optimizing your keyword research process and structures on an ongoing basis.

Finally, ask yourself if all the products contained in the ad group are related to each other and confirm that the keyword or ASIN targeting strategy in the ad group can apply to each product. By narrowing your campaigns down to specific ad groups, you are effectively aiding your overall campaign structure and ensuring that your ads are relevant to target audiences. Advertising on Amazon in 2022: A Guide

Get an overview of the available features and functionality of advertising on Amazon in 2022. Learn the five steps to conducting a PPC audit on Amazon to combat rising advertising costs and create a PPC strategy that works. Amazon Sponsored Display Updates in 2022: What You Need to Know

Get Amazon’s new round-up of Sponsored Display updates in 2022. See what’s in store for holiday shopping this year with tips on formulating your ad spend to get the most out of your strategy.